I have had the privilege of living with my sister-in-law, Bridget Jones, since 2004. Bridget has Down syndrome, which makes her not only special, but extraordinary. She is full of love and cheer. Guess what? She is more like me and you than you know. Instead of me telling you everything about her, let’s hear directly from Bridget!

“Hey everybody, my name is Bridget Jones. I’m 43 years old. Many people don’t understand what I’m all about- why I’m special. I’m human just like everybody else. Most people know that I am famous for that movie named after me, do you know the one? It’s called Bridget Jones Diary. Yeah that’s about me. Wink, wink!

What many people do not know is that I am indeed very verbal. I’m not sure why people are afraid to speak to me sometimes. I guess it’s because they are intimidated by me being so famous, right!?! Surely it’s not because I have my own special good looks?!?! I have a great signature, so I’d gladly give them an autograph. I guess they are too scared to ask me. I get it. I’m famous.

I also love to go have fun and play slots at casinos just like millions of other people like yourself. Slots are fun. I enjoy playing slots and talking with the servers. They are always so nice to me.

I was born Sept. 17, 1975 to a wonderful mother who was only 23 and she already had two other little girls. Back in those days the doctors didn’t quite understand what Down syndrome was. They had no way of preparing expectant parents for this big surprise. The doctor took one look at me and said, ‘Oh! I believe she is a mongoloid!’

At first, my nervous mom screamed and cried because she didn’t know what that meant. She must’ve not known that she had won an extra chromosome through me! ? Most people only have 20 chromosomes, I’m not sure why I was chosen to get an extra one. Woohoo! I guess it’s because my family needed some extra love!

The doctor said my tongue was thick, my hands were short, my eyes were slanted, and my ears were kind of off set. He then recommended that my mother put me in a mental facility group home because he didn’t think I could ever be very smart or successful. However, she quickly gave him that dirty motherly look (you know the one) and took me home to celebrate this new national holiday…my birthday! ???I look forward to this awesome day all year long!

My mother had an aneurysm and later passed away, and I have lived with my older sister, April Placek, and my favorite brother-in-law, James Placek, since 2004. If my sister and brother-in-law forget to talk about September 17, 1975, I will quickly throw hints that this day is arriving soon so they know to get prepared for my annual celebrated, extra-special spaghetti dinner. Sometimes my sister doesn’t want me to talk about my birthday so much, but I have figured out new ways of bringing it up. I just ask her what the date is, hehehe. Then she realizes it is approaching. Can’t ever forget “My Birthday”.

I have what’s called mental retardation as well as Down syndrome, so sometimes I like to color like I did when I was a little girl. Other times I like an ice cold adult beverage just like any other adult. I’m a human just like you.

I also have a major crush on Charlie Sheen. He is so cute. I always watch his show called Two and a Half Men and I really do not like the new show without him. Bring Charlie back.

I have many compulsions and I CANNOT stand random lights being on inside the house. Don’t turn lamps on or I will turn them off.

These are just a few things about me. And did I tell you that my uncle George Jones died recently? I’m not sure how nobody else realized that we were related? Last name Jones (duh).”

So, as you can see, my sister-in-law is beyond special and fits in this world just like me and you. We are all human beings and possess each of the same emotions and have the same desires in life. The next time you see someone with Down syndrome – go up and put your arms around them and tell them you are so glad to meet someone so special and awesome. You may just get an autograph! 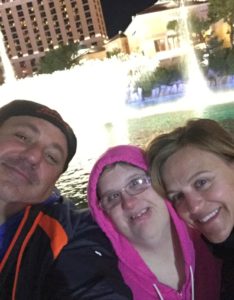 James Placek, Bridget Jones, and April Placek in front of the Bellagio Fountains in Vegas.