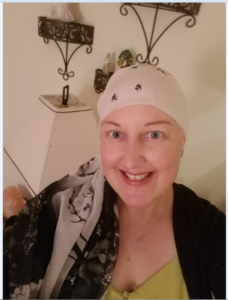 I had my first mammogram 2-14-18. I giggled to myself on the way there thinking that now I was officially old since I needed this done. It stopped being funny when I was called back for more images and told I needed a biopsy. 2 days after my biopsy, my results were in and I was asked to come to the doctor’s office. No one gets called to the office for good results. My boyfriend came with me. I didn’t ask him to come, he just told me he was going. He knows me well and knew I would have tried to be brave on my own. I was glad he was there. Hearing you have cancer knocks the wind out of you. The doctor spoke but I barely heard another word. I just stared at her with tears streaming down my face knowing that my life was about to drastically change.

After the news, I made calls to my close friends and family. The hardest talk was the conversation I had with my daughter. Since my divorce 10 years ago, I have tried to be her example of a strong woman capable of anything. I no longer knew what I was going to be capable of. As hard as I tried to be strong, when I told her she was still scared. I felt like I failed her.

The next day I saw a surgeon. I brought my best friend Michelle and she took wonderful notes for me as I was still in shock. All I wanted was this cancer gone NOW. The surgeon needed to wait for more pathology results and he wanted to send me for more tests. I’m a bit of a control freak, so not having an immediate plan of action was torture for me. Finally the surgeon was ready to schedule my surgery. I opted for a lumpectomy, which is breast conserving surgery. I had stage 1 ductal carcinoma in situ (DCIS), the earliest form of breast cancer and it had not spread. My cancer also tested positive for estrogen and progesterone, meaning the cancer feeds off these hormones.

I took eight days off work to recover. During my recovery, my boyfriend was diagnosed with bone cancer. How could this happen, who gets cancer together? I thought either I was contagious or God just hates me. I was in love with a wonderful man and now we both have cancer. His cancer was much more aggressive than mine. He made the decision to get treated in his home country of Turkey. He would be under the care of his brother who is a doctor. I was devastated, but his prognosis was good and it would only be temporary.

After my surgery, I met with the oncologist to discuss further treatment. He said the dreaded C word, CHEMOTHERAPY. Due to my “young” age and the size of the cancer I was at high risk for reoccurrence. I was set to have 5 months of chemo, a month of radiation, and hormone therapy to follow.

I handled the chemo pretty well. Either my daughter or Michelle went with me to every treatment. I was very fatigued and nauseated at times, but I pushed through it. 13 days after my first chemo treatment, my hair started falling out. I wasn’t one of those brave women that throws a head shaving party. I was scared to lose my hair and afraid of looking like a cancer patient. I held on to my natural hair as long as I could. When it became too thin I shaved it myself and I really felt a lot better. On Mother’s Day, I wore my wig in public for the first time.

I frequently get asked “why are you still working?” I respond with “because I’m not dying!” My cancer center is close to my store, so I arranged doctor’s visits on my lunch breaks and chemo and radiation either before or after work. It meant so much to me to continue working, I love what I do and I needed to feel normal. I knew I would have to put my path to becoming a District Director on hold; however, I was not going to let my store down because I had cancer. I had some of my best months during the 5 months I was on chemo. Seeing the store hit all the big rocks made me thrive and I knew the cancer was not going to win! The store would not have prospered without the help of my Store Manager, Latrese. Latrese immediately stepped up during my time off. She also rearranged her schedule to accommodate my appointments without one complaint. My District Director and Regional VP made it clear that my health always came first. At times, I needed additional help and my nearby “sister-stores” were quick to help with coverage. The support of my team in District 36 means so much. I’m part of the best district!

For now, my prognosis is good. I didn’t have a history of breast cancer and no one ever felt a lump, I simply got a mammogram when I was told to. Currently, I am done with chemo and will start radiation on October 1st of this year. My boyfriend is almost done with chemo and we expect him to return to the U.S. early next year. We video chat every day and what could have torn us apart, has made us stronger. I don’t really think that God hates me. I’m actually a very blessed woman. Yes, I got breast cancer, but I got the earliest and most treatable type of breast cancer. I’m blessed that I am strong enough to withstand treatment, and that I only missed one day of work during the five months of chemo. I’m blessed to have the best of friends and close family. And I’m blessed to be a part of such a great team here at Titlemax.